Chicago is a great city known for plenty of things. They are a food city that boasts a number of ethnic delights from Polish cuisine to world-class pizza. The quality of the water is generally considered to be good, most of the time, but it is not without its problems. Is Chicago tap water safe to drink? Keep reading and you’ll find out where Chicago tap water comes from and what contaminants are coming out of your faucet.

Where Does Chicago Tap Water Come From?

As you might have guessed, Chicago tap water originates in Lake Michigan. It’s then treated at two water treatment plants in the city — Jardine Water Purification Plant and Sawyer Water Purification Plant. Given the proximity of Lake Michigan and the fact that it’s one of the largest lakes in the entire world, it makes a lot of sense that this is where Chicago gets its drinking water.

Unfortunately, Lake Michigan does have a lengthy history of pollution issues, including a recent toxic chromium spill from U.S. Steel that lead to a major lawsuit.

Can You Drink Chicago Tap Water?

If you’re going to drink Chicago tap water straight from the faucet, we recommend using a water filter before you take a drink.

While all cities see some form of contaminants in their water, Chicago has found toxic levels of lead in waters that were drawn in as much as 70% of homes in the last two years. Lead in the water is especially dangerous for young kids, infants, and fetuses as it can cause serious damage to the central and peripheral nervous system, according to the EPA and CDC.

A great way to combat this particular issue is with a water filter that specializes in removing lead from your water. You can check find the best water filter by reading reviews on a wide range of filters based on price, size, and the number of contaminants they remove.

What Contaminants are Found in Chicago Drinking Water?

First let’s look at contaminants that are present at the highest levels. Eight of the nine contaminants bring a risk of cancer with them. These include:

The ninth contaminant that is present in higher levels are hormones. Chicago tap water has been found to have two hormones present. These hormones include 4-Androstene-3,17-dione and Testosterone. Hormones are found in drinking water when animal and human wastewater mix with water sources we use for drinking.

The additional ten contaminants found in Chicago tap water include:

If you’re worried about the contaminants found in Chicago drinking water, you can add a water filter to clean out many impurities and make your drinking water much safer to drink. A whole house water filter is a great way to cover all your bases. Of course, there are many different options where water filters are concerned. You can also get single faucet water filters or something as basic as a countertop water filter pitcher.

Some available water filters that can help improve your Chicago tap water include:

You can also find water filters that specialize in removing Chlorine, Fluoride, or other specific contaminants.

So, can you drink Chicago water? The water is supposed to be safe to drink, but the quality and taste will improve with the use of a water filter. This will remove or reduce the number of contaminants in your Chicago tap water and make it even safer to drink. If you have any other questions, you can leave them in the comments. 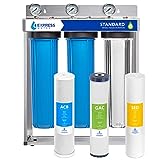 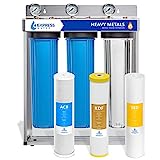 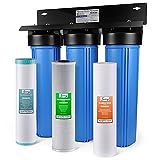